Bradley Hanson began his career in photojournalism on good old fashioned film and moved on to shooting weddings in the late 90s. While living in Seattle he quickly became one of the Pacific Northwest’s most sought after names in wedding photography, and after moving back home to Minnesota he's become of the few wedding photographers we recommend there. Read on to learn more about him and see his impressive work in the documentary style.

So good to have you here with us, Bradley! Give us your origin story!

I started in photography at age 10 because I was fascinated with the process of light going through a piece of glass, hitting a piece of plastic film and magically turning into a photograph after a chemical bath. A few years later, I shot for my high school newspaper and yearbook, which was my first experience in the darkroom. I then took some college classes so I could use their darkroom, eventually attending the Minneapolis College of Art And Design. I used to bike around with a 20mm lens and B&W infrared film trying to make surreal images while I was also taking model portfolio shots with an 85mm and Polaroid Polapan film.

I started working at a professional photo lab in 1990 and it was, honestly, seeing a lot of work from professionals that made being a photographer go from seeming like a dream to becoming an attainable reality. Things are always easier when they do not seem abstract or impossible. I was too shy to ask to assist anyone, which ended up being a benefit later. I moved from Minneapolis to Seattle in 1997. There I did a few model headshots and ended up doing some family portraits. I also worked freelance for the two weekly Seattle papers (The Stranger and Seattle Weekly).

One of my portrait clients asked me to shoot their wedding and I decided to go for it even though I had no clue what to do. I had a few photography books but knew nothing about weddings. I didn't even google weddings; I just went in blind and took the kind of photographs that hit me in the moment. This was 1999, so of course it was on film. When I got the 4x6 proofs back, I was afraid to look at them. To my surprise, a lot of them were really good. Unfortunately, the next few weddings weren't as good because I was still trying to figure out what I wanted to say and what inspired me. Once I started shooting only what I wanted, my satisfaction went up and I started improving quickly.

When did you first realize you had fallen in love with wedding photography?

There have been a lot of little moments that created an emotional snowball, but one thing that stands out is a photograph I made at Salty's restaurant in West Seattle. The couple was doing a sparkler exit and a flash I'd been depending on was too low on batteries to use. I was focusing manually and exposing manually with these Leica M6 rangefinder cameras, so I was nervous about nailing focus. I had ISO 3200 film loaded in the camera (Kodak TMAX 3200) and I only took 3 shots during the exit because I was near the end of a roll (problems that don't exist today). The sparklers gave just enough light to handhold 1/15th of a second shutter speed and one of the images looked particularly beautiful to me. A few years later, I entered that image in a PDN (Photo District News) Magazine wedding photo contest called "Top Knots" and it was a winner in the 2004 contest. I never got any feedback outside of getting images published in Seattle Bride, so it was my first real validation that something that was inspiring to me also appealed to someone other than a client. I guess the best way to describe it is that it was the moment I realized I could impress myself and take the kind of images I admired in photography books. This image is still in my portfolio.

Why do you love shooting weddings?

I really value having access to all of these personal, emotional, and private moments, which are a target-rich environment for real, candid moments. I don't like to direct the action and I have no interest in working off a template of the same shots at every wedding. The excitement of not knowing what will happen or what I will see adds an element of pressure and unpredictability, but the images I love are ALWAYS the ones that just happen in front of me. The way I have described it before is that I don't pre-visualize images, but I have the ability to recognize them like a bell is going off. It's very exciting and motivating.

What’s been your biggest challenge in your career?

I didn't think I would share this, but I was my most successful before social media. Just when it felt like everything was going my way, I was going through a divorce just as the economy started tanking in 2008. I ended up having to relocate back to Minneapolis to be with my 2 children. The economy was devastated and I was emotionally spent as well as financially tapped. Most of my work at that point had been referrals from past clients and wedding planners. Leaving all of that behind for a slightly smaller market during the worst recession since 1929 was tough. I spent a LOT of money flying back to Seattle for almost 2 years to shoot the weddings I'd booked, and meanwhile I had to get new weddings in a city where I was persona non-grata as a photographer.

What is your creative process when looking through a camera?

The way I shoot is to "see" an image about to happen. I hold the camera to my eye and wait for the right light, the right composition, the right juxtaposition of elements, someone to smile, etc., and then when it happens I get a feeling that I want to preserve. Ultimately, my favorite part of wedding photography is that feeling. I get that same feeling anytime I make a photograph that I'm proud of.

I have repeatedly downplayed the role of equipment for photographers and honestly, I take the same photographs with my iPhone as I do with a "real" camera, but I started shooting mirrorless cameras in 2012. This was my first experience with an electronic viewfinder (EVF) and the real advantages are that I can see EXACTLY what I'm getting, in terms of depth of field but more importantly, I shoot with my EVFs set to high contrast black and white, which means while the images are all recorded as color RAW files, I see the world as the black and white images that tend to be my favorites. This layer of abstraction is both inspiring and allows me to see composition and lighting better.

Ralph Gibson's abstract, high contrast B&W images were the first images that really made me love photography. I bought a book of his in 1988 and it honestly changed my life. It also taught me that there is beauty in everything and the most common, seemingly mundane subject can be beautiful. I did a week-long workshop with him in 2003 in Vancouver, BC and loved it. There are so many other photographers I love, but I'd have to say that Henri Cartier-Bresson's compositions were mind blowing when I was taking photography class in art school. I love a lot of other photographers, like Elliott Erwitt, but Cartier-Bresson really pioneered the compositional approach to things happening in real time. My approach to weddings is probably a fusion of these two approaches, even though my photographs don't look like either of them.

What should brides and grooms look for when shopping for a wedding photographer?

Look for images that resonate with you, make you feel good, and give you an immediate sense of what it feels like to be there. Look for something you haven’t seen a million times before. There are a lot of photographers copying each other, following the same trends and trying to make sure they offer images that are currently popular. There must be a lot of clients also looking for these images as there is no shortage of them. All that really matters is that you find images that reflect your taste and that you can imagine yourself in. It’s also important to see at least one or two complete weddings so you can see how a photographer you are considering sees an entire wedding and to see if they can deliver in all kinds of lighting and situations, as well as create a consistent look and quality for the duration of an entire wedding.

One of the portfolio trends is showing tons of photographs of the couple sitting in a field, backlit with gobs of flare like a lifestyle shoot. Personally, I love backlight and strong sidelight and I think flare can be beautiful, but the point is that if a photographer is only showing you posed photographs of couples, they might not be skilled in low light or shooting spontaneously. That brings me to a related point: Are you comfortable in front of the camera? Most people, including myself, are not. If you don’t like posing for the camera and don’t want to spend a good chunk of time posing for the camera as a couple and with your family and wedding party, look for a portfolio that features images that were clearly made spontaneously in the moment. Because this is what I appreciate personally, it’s how I shoot and I can recognize it immediately in the work of others.

At the risk of providing too many things to look for, it’s also important to make sure you “click” with your photographer’s personality. Part of how I blend in is to get on the same energy level as my clients. I try to answer as many things as I can on my website FAQs and when we talk during a phone consultation. If you can, MEET your photographer before your wedding, either for coffee, wine, or a photo shoot. See how you feel. Is it easy? Is it awkward? Whatever it is, it’s probably going to be like that on your wedding day.

Thank you so much Bradley for giving us a chance to know you even better, and for sharing your thoughts with our readers. It is a thrill and an honor to promote your work! 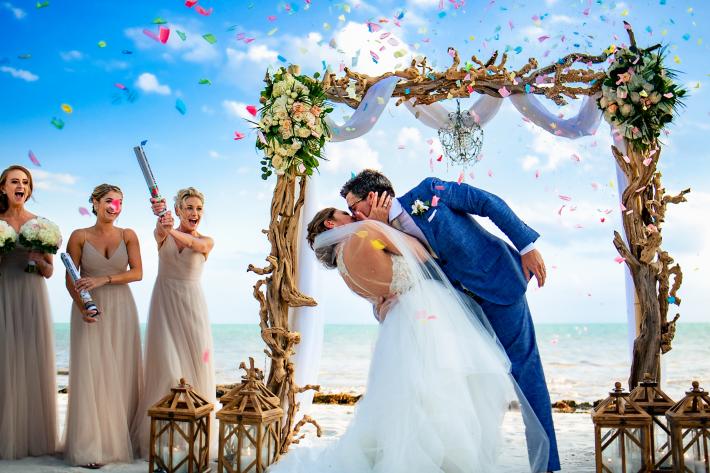 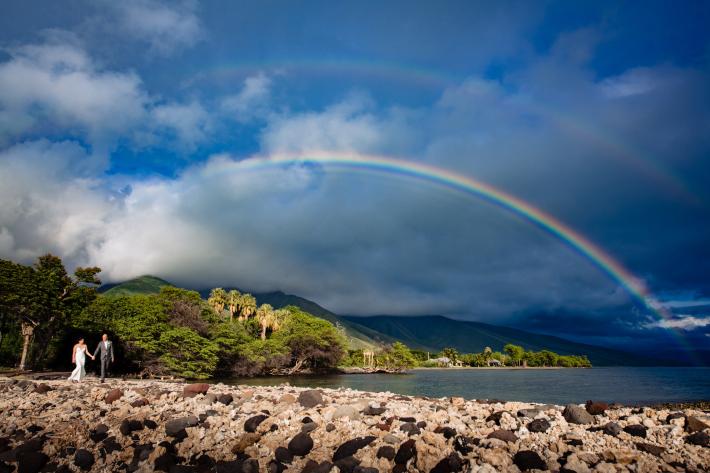 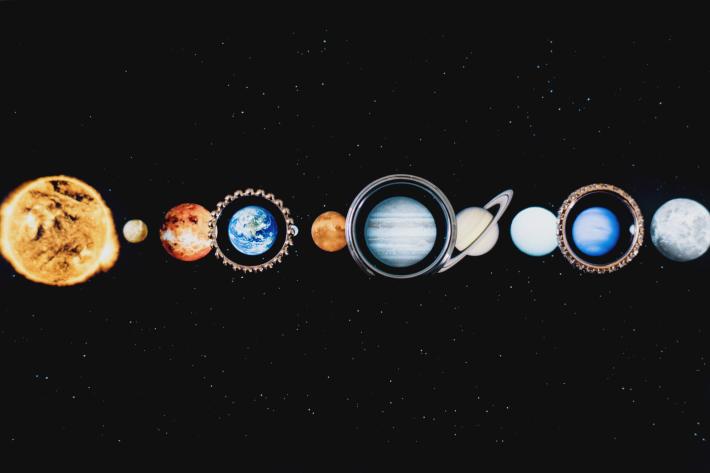